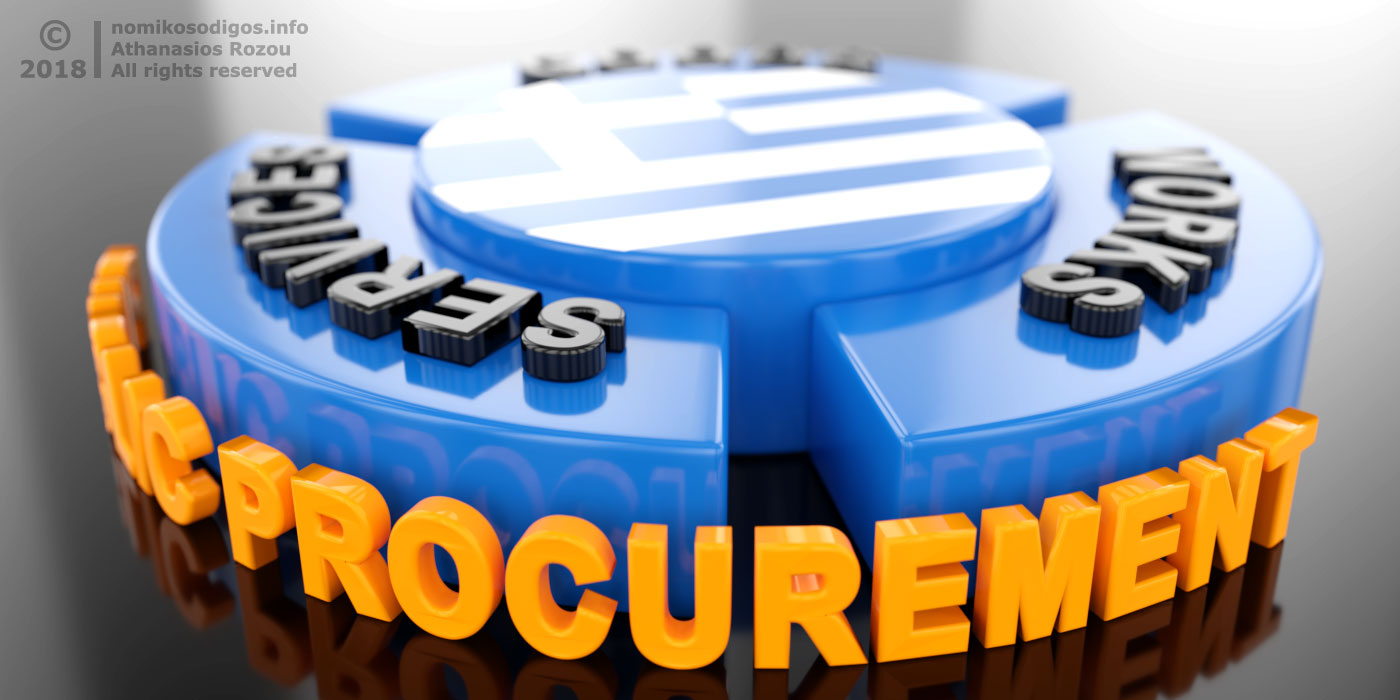 The law on public procurement (Law 4412/2016, Greek Government Gazette A 147/08.08.2016), under which the Directives 2014/24/EU and 2014/25/EU were incorporated into the Greek legal order, imposed on the Contracting Authorities the use of the online platform of the National Public Procurement System at all stages of public tenders with an estimated value of more than sixty thousand euros (60.000€), excluding VAT. The law consists of 379 articles that cover all stages of public procurement from the conditions for the participation of the Economic Operators to their judicial protection during the stage after the award of the contract.

The Eligibility to Participate in Greek Tendering

In Greek tendering procedures, enterprises with head offices in the following locations are eligible to participate:

In accordance with Law 4412/2016, a great opportunity has opened for foreign enterprises--especially those based in Bulgaria--to tender for Greek public sector supply contracts, under which the delivery of the supplies will be conducted in Northern Greece. Companies based in Albania and the Former Yugoslav Republic of Macedonia, in which the GPA ratification procedure is at an advanced stage, will soon be able to participate in Greek government tenders too. However, the preparation of a foreign enterprise for an offer submission should begin immediately after the publication of the contract notice in order to give enough time for all necessary supporting documentation of the enterprise to be collected, marked with the Hague Convention (apostille) stamp and translated into Greek by a Greek lawyer on time.

The Stages of Public Tenders

The ESPD and SSDF

The 2014/24/EU and 2014/25/EU Directives have facilitated the participation of companies in government tenders throughout the EU through the implementation of a common legislative framework in all member states. According to this philosophy, and in compliance with Article 59 of the 2014/24/EU Directive, the Greek Contracting Authorities accept at the stage of submission of the technical offers, depending on the contract budget, either the European Single Procurement Document (ESPD) (paragraph 1, article 79, Law 4412/2016) or the Standard Statutory Declaration Form (SSDF) (paragraph 4, article 79, Law 4412/2016). The goal of the European Directives is the commitment of the Economic Operators to the Contracting Authorities that they meet the requirements set by the call for competition notice by filling out and submitting these documents. In this way, the tenderers save time as they are free from the obligation to collect and/or translate the supporting documents for the competition. The Economic Operators provide these supporting documents only if they are awarded the supply, work or service.

Example: An enterprise (Economic Operator) of Greek interests based in Plovdiv, Bulgaria, took part in a public tender for a one-year food supply to a hospital in Bucharest, Romania, (Contracting Authority), with a total contract budget of one million euros (1.000.000,00€). The enterprise participated in the tender by including in its technical offer folder ONLY the European Single Procurement Document (ESPD), by which it declared that it meets the requirements of the contract notice as an Economic Operator. After the opening of the tenderers’ financial offers, the aforesaid enterprise was declared a successful bidder for the supply of three kinds of products from the group of vegetables and two kinds of products from the group of poultry. After having been declared a successful bidder, the enterprise was invited by the Contracting Authority to present all its translated legal and supporting documents and sign the supply contract.

The Greek Reality of Public Tenders

In Greece, instead of simplifying the procedure of the participation in public tenders, Law 4412/2016 brought the opposite results. Most Contracting Authorities haven’t yet adapted to the spirit of the new European Directives, requiring Economic Operators to include in their technical offers’ folders, along with the ESPD and SSDF, all the other supporting documents requested by the previous legislative framework as well. Therefore, bureaucracy has been intensified rather than limited.

Common Causes of Exclusion of Economic Operators from Public Tenders

It is often the case that an Economic Operator is excluded from the second stage of the tender procedure (opening of financial offers) either by direct decision of the Contracting Authority or following a preliminary opposition filed against them by another Economic Operator, due to the incompleteness of their technical offer folder. Failure to present a supporting document, submission of documents other than the requested ones, error in law as regards the right to participate in the public tender, incomplete text of an affidavit, incorrect completion of the ESPD and the SSDF, use of copies of documents uncertified by a lawyer, incorrect document digitization and uploading of documents into the incorrect online folders are common causes of exclusion of Economic Operators. Exclusion for the above reasons might be the result of misinterpretation of the call for competition notice, due to ignorance of the Greek legislative framework for public procurement.

Example: The enterprise of the previous example, after successfully participating in the tender conducted by the Bucharest Hospital, wished to participate in a tender for the supply of equal budget value conducted by a hospital in Thessaloniki, Greece. In addition to the ESPD, the Contracting Authority, with scattered references in the call for competition notice, requested that the Economic Operators include in their technical offer folder ten certificates from public authorities and four affidavits. At the same time, there were several ambiguities in the contract notice that needed clarification. Even though the enterprise demonstrated–as much as possible–due diligence in the preparation of its technical offer folder, it was excluded from the next phase of the procurement procedure because it did not include an affidavit of its legal representative, the presentation of which was not clearly stated in the call for competition notice. At the same time, the enterprise lost time and money to collect the extra supporting documents that had to be submitted along with the ESPD in the technical offer folder.

Several times, the Contracting Authorities do not thoroughly audit the tenderers' supporting documents, and therefore, unlawfully accept offers that do not meet the requirements of the contract notice. This is largely due to lack of specialization and training of the staff that composes the Contracting Authorities, as well as to the mindset that all tender offers are lawful, unless otherwise judged by the Authority for the Examination of Preliminary Oppositions (AEPO) and the Administrative Courts. In the latter case, if an Economic Operator considers that a competitor was illegally passed to the next stage of the tender procedure, it should seek the cancellation of the relevant decision of the Contracting Authority by filing a preliminary opposition to the AEPO.

Example: The above-mentioned enterprise, considering that its exclusion from the next stage of the public competition was unlawful, assigned a lawyer to draw up and file a preliminary opposition to the Authority for the Examination of Preliminary Oppositions (AEPO) for the annulment of the relevant decision of the Contracting Authority. The preliminary opposition was examined by a Commission of the AEPO within 20 days of its filing, and 10 days later the decision was adopted, which accepted the opposition. The decision of the Contracting Authority was annulled by the AEPO and the Economic Operator was able to continue to the next phase of the public competition.

Judicial Protection of Economic Operators at the Pre-contractual Stage

In the event of the rejection of its preliminary opposition by the AEPO, the Economic Operator has the right to file a request for cancellation and an application for interim measures to the Administrative Courts.

In the example above, if the AEPO rejected the preliminary opposition, the Economic Operator would have the right to file an application for suspension to the Administrative Court of Appeal within 10 days from the adoption of the decision. If the Administrative Court of Appeal accepted the suspension request, the Economic Operator could then also file an application for the cancellation of the decision of the AEPO to the same court.

Our law firm, having more than 10 years of experience in public tendering, as well as in the newly set-up electronic system of NPPS (Greek: ΕΣΗΔΗΣ), provides legal assistance to natural or legal persons who reside, or have their registered office in a foreign country, at all stages of public procurement procedure and in particular: